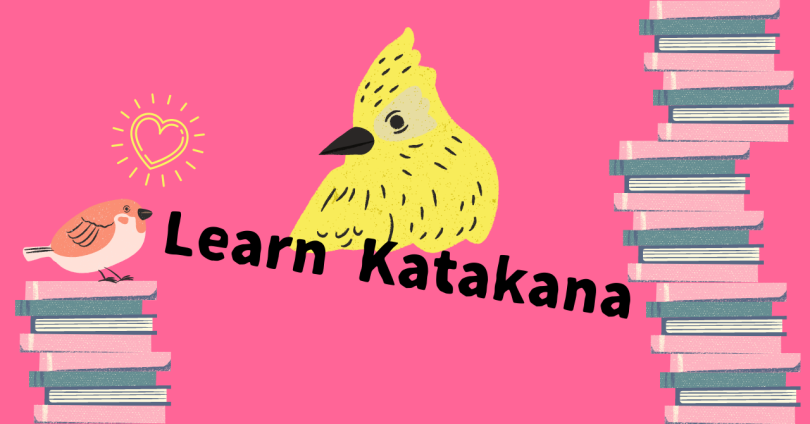 I heard this question many times.”I’ve already studied hiragana, but do I really need to learn katakana? “

More than 80% of students are not good at learning katakana, or rather, they skip it at the beginning of their studies, and even at the intermediate level, many of them still consider it to be a weakness. However, katakana plays a very important role in studying kanji later on in the course. If you’re a beginner, don’t run away here, master the katakana!

Should I learn Katakana or Hiragana first?

First, let’s study hiragana. This is because it is important to study hiragana to learn how the sounds and letters of the Japanese language work. For more information about hiragana, please see this article.

Then, learn katakana right away! (It’s important not to let time pass!)

Let’s see Katakana chart well. Here you can download handy Katakana chart. Print it out and post it, preferably in front of you, until you have mastered it.

Oh….Katakana are so similar that I can’t remember them.For those of you who are confused.Let’s take a look at the katakana forms that require special attention. It is important to understand the difference and be able to read correctly.

It may be more difficult to understand than hiragana. Please try to observe them carefully. And try the katakana exercises too!

How to learn Katakana

The katakana is very similar in form. Therefore, I strongly recommend that you learn by writing. And practice paying attention to each shape. Try to write your name, country, food, and other familiar things in katakana.

Use the special notebook for writing Japanese and write the shapes correctly. I promise that this practice will help you in learning Kanji in the future.

Before I explain when to use katakana in Japanese, let me explain about the “ー” symbol, which is mainly used in foreign words, mimetic words and onomatopoeic words. This symbol means that the preceding vowel is pronounced twice as long as usual.

Example 2. ドーン[doon] :The sound of a large object falling

When do I use Katakana

Students often ask me, “Why do you write this in katakana? There are two main reasons. I have categorized them into more detailed categories. I would like to explain each of them with examples.

It is used for words that are not originally in Japanese. It is worth noting that it is not only in English. This is where the confusion comes in for learners. They are similar but different words. Let’s learn them by checking the sounds carefully!

These are just a few examples, but many terms in food culture, art, and fashion come from French, and terms in medicine, academia, and mountaineering come from German. Also, many words from Portugal and the Netherlands, which have had close relations with Japan since the Edo period, are found in daily life in Japan.

b. Proper nouns (names of people and places in foreign countries)

n Japan, names of foreign people and places are often written in katakana. In contrast, many foreigners feel uncomfortable with this. This is because it is difficult to replace all foreign sounds with Japanese sounds. If you want to make Japanese friends, I suggest you come up with a nickname that is easy for Japanese people to pronounce!

Example 1. ゴク [goku] : The sound you make when you drink something.

2. To create an effect by using different notation from the general public

As a result of writing hiragana words in katakana, words written in katakana can catch the reader’s attention.

-The most important thing for a company is its people.

※The word “はまる” originally means “to fit in,” but is often written in katakana when it is used to refer to something you are really into or do a lot.