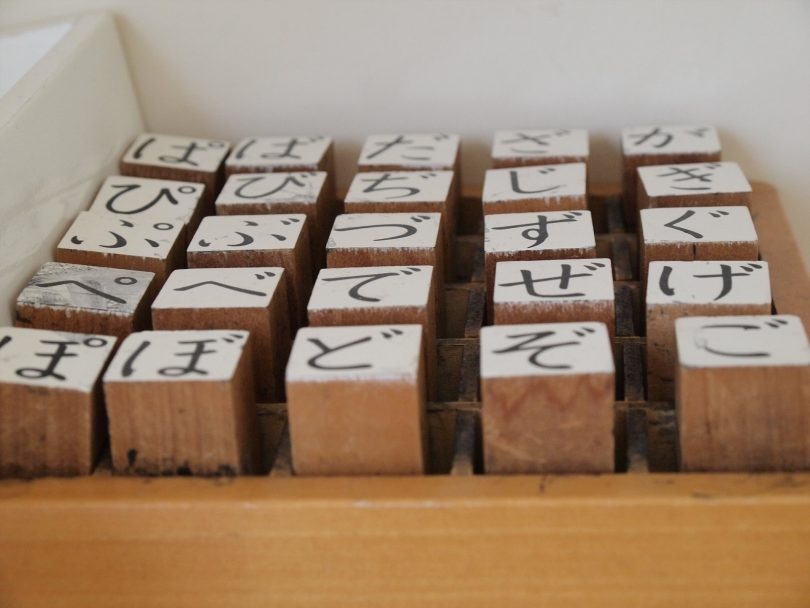 Learning the letters in any language is about building a foundation. Even if your goal is to speak, it is very important to look at scripts, read example sentences, and make connections between letters and pronunciation. This article will focus on being able to read and will show you the steps to follow.

Everyone has their own way of remembering. Some people learn by ear, some by sight, and some by writing, but the goal of your first step is to be able to read. What I mean by that is that the goal is not to write beautifully. Even I, as a Japanese, spend less time writing and more time typing. This is also true for kanji. Your goal should be to be able to read, look at the characters and pronounce them correctly.

Look at the table. Hiragana consists of 5 vowels (column) multiplied by ten consonants (line). If you combine vowels and consonants, you get 50,but currently, only 45 of these 50 squares are used in formal writing. Adding  “ん” [n] gives us 46.

▶Here is Gojuon audio. You can download and repeat.

Pronunciation to watch out for

を (sounds [o],not [wo]. This sound is only used for particles in sentences.)

One of the most difficult words for English speakers to pronounce is “らりるれろ“. The Japanese word “ra” is neither [ra] nor [la]. The key is to pronounce it by flicking your gums without rolling your tongue.

Pronunciation to watch out for

▶Here is Dakuon,Handakuon audio. You can download and repeat.

Youon is a combination of a consonant in the [i]column and a “や[ya],ゆ[yu],よ[yo]” . “や,ゆ,よ”  is written in small letters after the consonant.

▶Here is Youon audio. You can download and repeat.

Sokuon is the sounds of pausing one’s breath. In notation, it is “っ”(small “つ”). When writing in romaji, consonants are written twice.

▶Here is Youon audio. You can download and repeat.

Chouon is a sound that extends the same vowel. This is mainly used when writing in katakana, and will be explained in detail in the Katakana article! Please see here.

How to learn Hiragana

As I mentioned at the beginning of this article, each person has their own best way to remember. For me personally, I am a steady learner who writes and speak out many times and practices repeatedly. Here are some tips to keep in mind when memorizing with your way.

Summarize in lines. Memorize the order of consonants together.

Remembering them in lines will also be necessary when studying verb conjugations later on. Being able to say the lines correctly will speed up your Japanese learning.

This is a Hiragana song with a melody.
I’m always happy when learners tell me that they like the Japanese pronunciation because it sounds so familiar. Let’s get your beautiful pronunciation!

▶Here is Hiragana melody audio. You can download and repeat.

Pay attention to hiragana that are similar in shape and observe the differences carefully.

This is also useful for learning katakana and kanji later. Writing hiragana over and over again without thinking can be a waste of time. It is important to observe and savor the noteworthy parts of the hiragana. If you develop this habit of observation, you will find it much easier to remember when learning kanji.

Today, as an example, I will show you 4 groups of hiragana.

Depending on the calligraphic style, the upper and lower parts of the “さ” is connected. The right side of “さ” is open, and the left side of “ち” is open. “き”is open on the right side, but has two horizontal lines.

The first thing you will notice is that the lines on the right side are different. And if you look closely, you will notice that the space between the two lines is wider in “い” than in “り”.

Learn intensively in a short period of time

I don’t recommend taking a month or two to learn Hiragana; study it once for a week, concentrating on it. In order to make it stick, you have to keep using it. I’ve prepared some practice exercises below, so practice reading them repeatedly. After that, post this hiragana chart where you can easily see it. Japanese children put it up in the bathroom, or in the toilet, so that they can see it and remember it in their daily lives.

What did you think? Now that you’re a hiragana doctor, you’re good to go!

Let‘s go to Next step!

The next step is katakana! Many people put katakana on the back burner, but you will be surprised when you come to Japan. Japan is full of katakana! And learning katakana will lead you to the next step, kanji. Katakana is used in some of the kanji. For more information, please check How to Study Katakana.