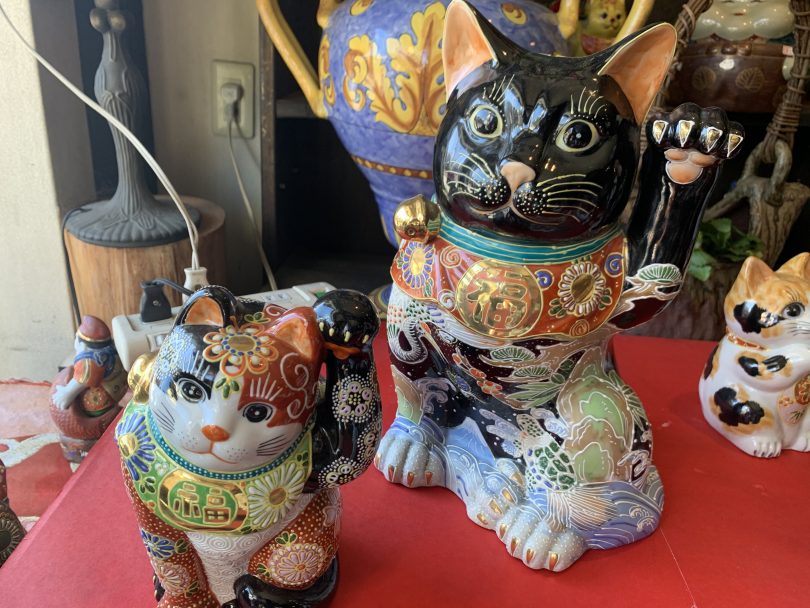 Have you ever seen a beckoning cat called “Maneki neko”? It’s a cat figurine that looks like it’s inviting people in with its paw. Let me introduce you to some secrets you may not know about this very popular cat that has spread throughout Japan and now the world! This will make you a bigger fan of the beckoning cat.

What is Maneki neko cat?

Maneki neko (beckoning cat) is said to be a lucky ornament that brings good luck to its owner. It is said to have been created in the Edo period (1603-1867), and is often placed at the entrance of restaurants and small stores with the hope that it will bring a thousand visitors and prosperity to the business. They are also sometimes given as gifts to bring good luck. The cat breeds of beckoning cats are traditionally depicted as tortoiseshell cats or Japanese bobtails. Take a look at the tail of the beckoning cat. You can see how short the tail is.

Which type of Manekineko is good for me？

The beckoning cat wears several things. Everything it wears is good luck.
The first and most common is a bell around its neck. Originally in Japan, domesticated cats often wore collars with bells attached. In some beckoning cat figurines, this bell has a lucky Chinese character kanji written on it, such as “福(ふく / fuku)” that means good luck.

White : luck in all things

This is the most common beckoning cat. Or there is a tortoiseshell cat buchi on a white background. In Japan, white is the color of purity and innocence, and is the color you see at weddings and sacred occasions. It is said to bring luck in all things.

Although black cats are considered unlucky in the West, they are called “lucky cats” for reasons such as “they can see even at night. In Japan, the color black, which is untainted by any color, is used to ward off evil spirits and misfortune, so it is placed at entrances and other entrances to prevent bad luck from entering.

This, as per the color, means money luck. According to Feng Shui, it is good to place it on the west side of the house. If you want to increase your money luck, try it!

Red is also said in Japan to be the color that keeps disease away. This is also placed at the entrance of the house, at the front door, etc., to keep bad diseases from entering.

Type of goods for Maneki-neko

The most common type is the figurine manekineko, which can be as small as 1 cm or as large as 30 cm. You can place them in your interior design.
It may also be fun to collect small ones little by little.

This one is a very nice gift for a child who loves Japan. Since you use it every day, how about always studying or working with your favorite Manekineko?

There are also goods that combine a cute beckoning cat figurine and tea utensils. This way, you can enjoy a cup of tea with a beckoning cat in the cupboard!

If you like beckoning cats, you should visit Gotokuji Temple.

One day, a lord was passing through this area and was beckoned by a cat at the temple gate to stop by.
While he was staying at the temple, suddenly thunder rumbled and it began to rain.
He was very grateful because he was able to avoid the thunderstorm.

There are several types of beckoning cats at this temple, and you can also get souvenirs.
Please visit here when you come to Japan!